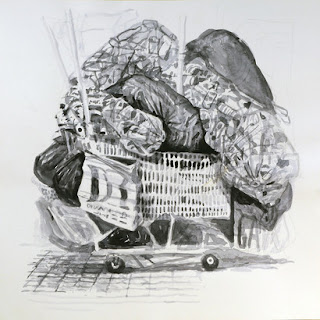 The homeless crisis which still plagues American cities began in the early 1980s as a result of the conservative economic policies of President Ronald Reagan. No longer encouraged or held accountable by government, housing developers stopped creating low-income housing units (opting for more lucrative projects), and as the number of these units dropped the number of poor folks rose. Reagan, furthermore, cut off government funding for the poor who needed help paying their rent and people were literally pushed into the streets of America in the early 1980s. No president since Reagan has attempted to fix this problem and in the last presidential election there were no discussions concerning homelessness in America. This problem was created by the Federal Government but it has been dropped into the laps of city governments that may not have the resources to do enough. 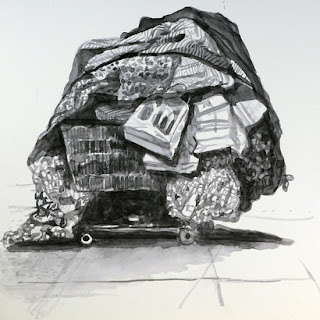 As of the summer of 2017, there were over 60,000 homeless people surviving in the New York City shelter system. About one-third of this population are children – homeless families comprise about three-fourths of the New York City shelter population. There are also about 4,000 people who choose to live their lives on the streets of New York. Perhaps this should not be surprising for the American city where the income gap between rich and poor is the most extreme, where folks in the top 20% of income earnings make 40 times what folks in the bottom 20% make. 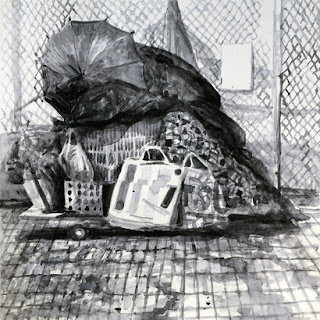 The 60,000 people in the shelter system are largely invisible to the rest of society; the established press never bothers writing about them. In America, if there is a social problem, we are good at providing services, but not so good at providing solutions. Often the services are mistaken to be the solutions and as long as these 60,000 people are not wandering the streets, further work does not seem needed. The homeless folks who will not go into the shelters and who pile all their belongings into shopping carts and wander around the city as eyesores, however, simply cannot be ignored. Slowly but surely sentiment in New York City seems to be turning against these folks due to negative stories by the established press. 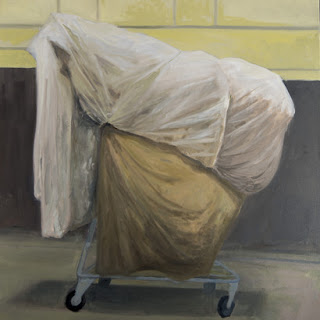 Daniel Turitz has created a series of paintings featuring these carts used by the homeless, thus disrupting the normal Chelsea gallery hop with a stark dose of social reality. He told me, “Walking across the street at 57th street and 10th avenue on a fall day, I came across a line-up of homeless carts and like most of the people on the street I found myself averting my eyes, keeping a safe distance and generally finding a way to make AS IF they weren't there. Words came to mind - incompatible, inconceivable - how can homelessness and the ever presence of these carts still exist amid the prosperity of such wealth in the city?” 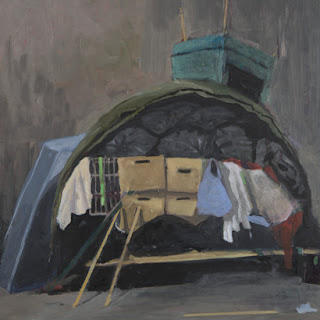 Turitz was, thus, motivated to create the series through his sense of wonder and shock concerning the carts. He also meets the challenge of painting them in a way that does not show insensitivity to the misery of the homeless nor preach to or self-righteously demand action from those viewing the carts. He seems to have accepted this challenge: Would it be possible to paint these carts without an agenda, just as the carts are, on their own terms, as urban phenomena? Thus, the viewer responds to the carts in the gallery without the mediation or manipulation of the artist’s will. The response of the viewer is not manipulated toward some end by the artist. 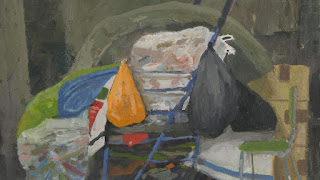 To do this, it is possible that Turitz might have had to divest himself of some level of sympathetic engagement in the actual painting process, although I feel the pieces make quite a powerful emotional impact in the gallery space. “I thought about how my questions regarding proximity, distance and intimacy led to making every small decision about the painting. Clarity, obscurity, and the mark-making itself was akin to establishing a buffer between image and viewer, painting and painter- similar to that same safe buffer we create between ourselves and the unsightly…each garbage bag, taut rope, loose piece of detritus or piece of discordant paint became more interesting as objects to move in and around the painting. I've thought about adding figures and still might going forward but these pieces are more influenced by the plasticity of still life than that of documentation or the narrative.”

Despite the buffer mentioned in the creative process, it is undeniable that these carts are going to arrest the attention of the viewer and demand some type of response, and this response should, perhaps, be examined by the viewer to determine its source, validity and level of humanity. The people who most need our sympathy and activism are often the people who test our patience and tolerance and who appear ‘unsightly’. This type of cart is enough to put anyone off and to hate the person pushing it – how do we overcome this and truly feel for the other and reach him/her somehow with love, compassion and help? The homeless person’s shopping cart is considered a huge irritant among the press and those others who simply wish a problem and the people responsible for the problem would disappear. This is not an acceptable attitude.

By separating the person from the cart and just presenting the cart, Turitz also provides us with the riddle of what exactly is contained in each cart. Is there a common denominator of things that one who has to live on the streets takes along? Does each homeless person pack different things? Are all of these objects really necessities? Could a person not live much more easily without all of the things being carried in such a cart? Therefore, the carts seem to point to the fact that there are some belongings which we cannot abandon even under the most adverse conditions and seems to ask what creates the emotional pull of those items that would make a person lug them around so painfully every day? What is it in these carts that the homeless refuse to abandon and are willing to suffer so much to preserve? Do we who have housing have such parallels in our own lives? What kind of shopping cart am I carrying around, figuratively, on a daily basis?

Because these carts contain every precious and priceless possession that one person owns and the cart becomes something to be guarded, protected and preserved day to day, Turitz can invite us to take the  important step of looking at the cart differently from the irritant we are being told it is. It can, instead, be viewed as a source of life, hope and comfort to people who are struggling in a daily effort not just to survive but to live as and be viewed as human beings in a heartless city of greed, malice and selfishness. The show runs until the 26th at 548 W. 28th street.