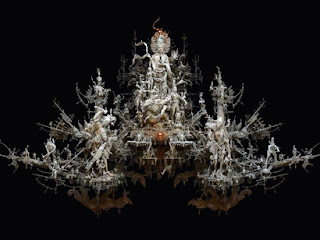 In this latest show by Kris Kuksi, at Joshua Liner Gallery, it looks as if the line between Guan Yin and Jenna Jameson might be starting to blur. By my completely subjective estimation, the central godlike figures seem, overall, less pacifistic than in previous shows and the chaste Athena-like goddesses have been replaced by more sexualized figures sometimes just bearing the trappings of religiosity, sometimes just baring themselves. It is as if we are witnessing a turning point in the relationship between religion and society, where the feedback loop is changing traditional religious iconography by infusing it with human sexual desire, a lust for power and greed. Traditional images once embodying ideals to challenge egocentric predispositions seem now to negate the pro-social and exult the will to everything Schopenhauer and Nietzsche drooled over. 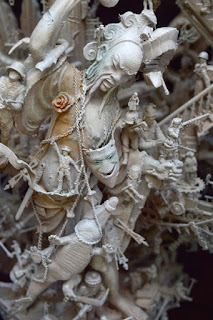 My first take on Kuksi, a few years ago, based on his iconic church-tanks and pieces similar to these in this show, was that he seemed interested in the paradox in which only terrifying weapons and various types of awe-inspiring military deterrence could possibly create the possibility for a peaceful spiritual pursuit within a nation that possessed this type of might. For example, indigenous religious practices were obliterated by the force of U.S. military technology. Is Kuksi saying there can be no pacifistic spiritual quest outside of a society that does not protect that quest with a zillion-dollar weapons’ industry and military complex? 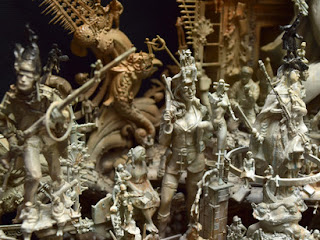 Gandhi, for example, opposed violence even against the Nazis during World War II. The implication was, I am assuming, that true pacifism and non-violent resistance must be followed even if it meant the thugs and beasts would temporarily take over the world. This would be the ground zero from which real world peace would germinate. Kuksi’s pieces might also be asking: Should we take the gamble that REAL world peace can only be ultimately created by following extreme and true pacifism (and let the monsters take over) or should we keep hedging this bet with our weapons systems (just today Boris Johnson said the free world exists under America’s nuclear umbrella)? North Korea and ISIS seem to have shown that the monsters can, however, create hopeless self-contained systems and how many Jews and others were going to be killed by Hitler before Gandhi’s pacifism really kicked in and germinated enough to change the system? Is this paradox of religions of peace propped up by weapons of war the best we can do in this imperfect world? 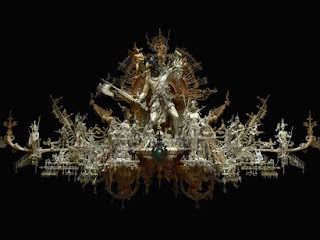 It could also be that the godlike and heroic idols, in Kuksi’s work, are the ones generating the warlike preparations and actions. This, in fact, seems to be an interpretation easier to gravitate to in this as opposed to earlier shows, where I feel Kuksi showed more ambiguity about who was starting what. Also, the variety of sizes of figurines, interestingly, makes it impossible for us to tell which are ‘alive’ and which are statues or dolls being worshipped or toyed with. Obviously they are all figurines, but within the context of the diorama, for the diorama to work, we need some of them to be ‘real’. Are the central images real beings surrounded by dolls and figurines of their imagination or are some of the small figurines real and worshipping giant statues while playing with dolls? Or is there another reason for the wild discrepancies in the sizes of the figures? 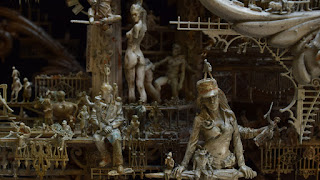 If this is not enough to ruminate on, Kuksi, to me, could also be parodying the idea of the allegorical spiritual fight to attain perfection, which is also a paradox. This goes way back. Seth represents an aggressive and destructive inner trait that destroys the inner peace and humanity that Osiris represents and Horus is that within us which has to knock off Seth, after Seth knocks off Osiris, to re-establish real inner peace for us. There seems to be a belief that, in order to attain peace and humanity, some battle between agents of the light and dark must happen (within us but represented by symbols). This is not always the case, however, as Buddha attains Enlightenment by sitting under a tree for 40 days and Jesus gets basically the same thing by fasting for 40 days – nary a demon, uncle, usurper or adulterer killed between the two of them. But it is always more fun when you can violently conceptualize your humane development in terms of slaughtering stuff that deserves to be slaughtered for an allegedly ‘higher’ end. 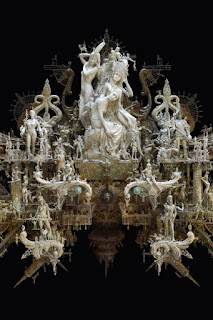 In his artist statement Kuksi says that he is fascinated by the design of pipework and mechanized systems as well as the flourishes of the Baroque. His ultimate goal, perhaps, therefore, is an abstract baroque design structured according to the principles of a piping system. You get the utilitarian structure to optimize space supplemented by a design that both obfuscates and glorifies the function of the piping. The placement of the figurines and their sizes, therefore, may have more to do with this need for Baroque design than their place in the overall spiritual war-hive. The baroque beauty is provided by the cumulative effect of figurines of violence and especially a type of violence which cannot be separated from religion. Considering that the core of the Baroque Era was the 30 Years War between Protestant and Catholic national leaders, it should be no surprise then that the medium is clearly the message in these pieces. The show closes on November 11. 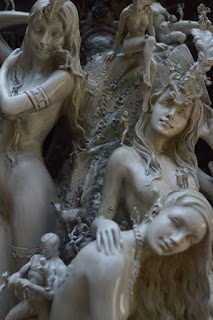