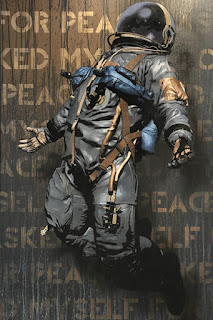 In allegorical literature, ‘coming home’ often meant the union of masculine and feminine that brings peace and stability. In the ancient world men were generally active and women were generally passive (due to social expectations and constraints) and this provided the substance for this type of symbolism. The active male became symbolic of a desire for something higher or more pure while the passive female represented the fulfilment of that desire accomplished through the male quest, battle or journey. This can be seen in such stories as Rama/Sita, Odysseus/Penelope and even Tamino/Pamina in the Magic Flute. 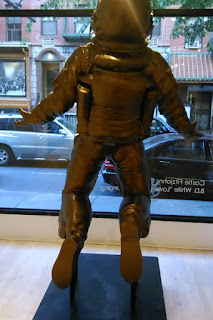 Perhaps there is no more extreme or salient contemporary example of leaving and returning home than that of the astronaut’s journey. In his current show Love, Loss and Longing at Castle Fitzjohns, BD White plays with the concept of astronaut as it relates to his personal life and lost love for a woman but, to me, the show is also an absurdist Bowie-like, Major Tom-take on the greater theme of union or failed union between the masculine and feminine that has dominated aspects of our art. 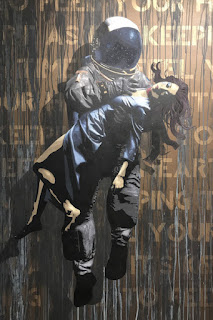 The astronaut is a quester who literally leaves the safety and warmth of his/her planet for a higher goal in the void of space. He/she must replicate a basic artificial and self-contained, though unsustainable, environment consisting of heat, breathable air and a suitable air pressure. He/she becomes alienated from both the earth and space through the life-sustaining mechanism he/she wears. The astronaut literally enters a void and can experience extreme isolation where one might be forced back on one’s own (painful) memories instead of dealing with new experiences. It might be like sitting under a bodhi tree for 40 days. 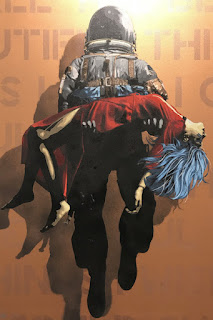 Indeed, the astronaut journeys into the ultimate hostile environment – the ultimate desert. Jesus was called into and fasted for 40 days in a desert before this process of isolation and self-denial changed him to the extent that he could pass the three tests of Satan and enter the world as an agent of transformation. The astronaut in the work of BD White, floating in his tin can, floating in the void, represents our contemporary symbol for desert transition and transformation – to me at least. In some of his depictions of his astronaut, we see postures of ecstasy, abandonment, being lost and/or liberation. 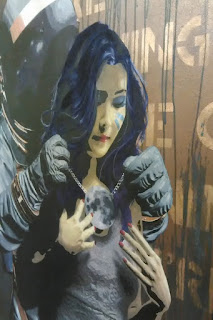 Yet, the space suit with its artificially self-contained environment also represents our act of will – our way and our choice to explore what should not, apparently, even exist in the first place (How could something come from nothing? How could something always be?) without any real hope of getting to the real answer of how the universe came into existence. As Augustine, Luther, Calvin and a host of others have argued, salvation is not something that can be chosen or pursued as a goal. It is something that happens through Divine Grace and mercy. When we choose to be ‘saved’, a Catch 22 kicks in, and we fall short. Our own will can never lead us to the fulfilment dreamed of in allegorical literature and its many quests and conquests. 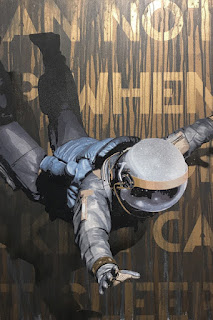 So in the works of BD White, we see this impossibility of union which is brought about through the spacesuit. What if, in our self-chosen quest, painful memories and reflection on them do not change us? What if we recognize and feel social shame toward, but cannot truly detest and overcome, our sins? What if we cannot reach the ‘ex ante’ and are left wallowing in the ‘ex post’ of unwanted emotional and behavioral responses? This leads to the absurdist comedy where the astronaut can see the woman, can ostensibly desire the woman, can have some contact with the fulfilment of a desire to return home but realizes an incomplete homecoming and this becomes the true reality of his quest…the circuit’s dead, there’s something wrong. The quest is kept alive but the possibility of consummation is rendered impossible. In his attempt to create imagery to capture and convey the inconsolable emotions involved in a difficult break-up, BD White also touches upon one of the most commonly used literary and cultural themes, pointing toward the difficulty of abandoning a self-destructive will to accept real deliverance. 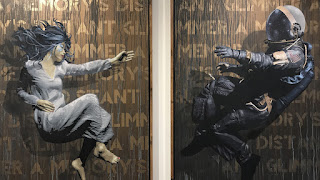