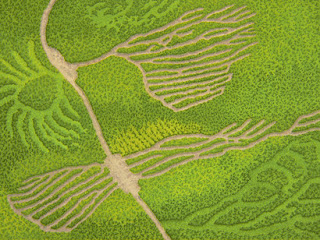 When Alan Bray was studying at the Villa Schifanoia Graduate School of Fine Arts in Florence, he was deeply influenced by the sincere faith and genuine spiritual aspirations in the work of the early Renaissance masters of that city. As he said before an audience in his home state of Maine, these were artists who “…actually believed in something”. It was a departure from the cynicism and irony he had experienced while studying in the US and, from this point on, Bray began to focus more on “stuff” he “cared about” – like his community and the natural environment of Maine. 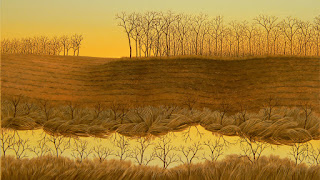 He also picked up the method of casein-on-panel painting at that time; casein is a type of paint derived from milk protein which was used before oil paint. This type of paint dries so quickly that if an artist makes a mistake, or wants to change something, he/she has to use sandpaper. But this type of paint also seems to help to give nature, in his work, the exciting sheen and piquancy that elicits wows and oohs from many folks who look at it. To me his work is a bit like Andrew Wyeth mixed with Casper David Friedrich (many writers have mentioned a “mystical” quality to Bray’s work) with a little, to my eyes, Henri Rousseau eccentricity in there (although, unlike Rousseau, Bray does not create anything that does not exist in its original setting). 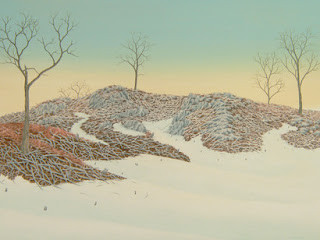 Bray’s images compel an immediate, stunning engagement that allows us to absorb the image at a pre-cognitive or super-cognitive level. When Heinrich von Kleist first saw the paintings of Casper David Friedrich, he remarked that looking at that work was like having your eyelids torn off. Bray also offers that intense novelty or newness of vision. The intellect remains dazed for a while as we do not feel the need to articulate. Bray’s work is a narrative killer (although there are often stories behind individual pieces), a Broca’s area stupefier. It represents Bruno’s approach to the universe and not Galileo’s: a bridge between nature and us, lacking any potential to exploit the earth for profit. You do not tell yourself anything about what you see because this capacity for narrative now seems a bit anachronistic. The work packs a wallop beyond words, and becomes the type of art fully accessible beyond interpretation. 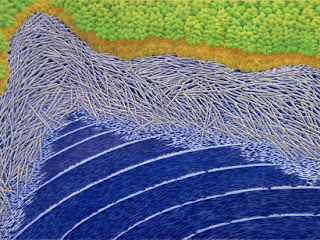 To me it packs the same wallop as, for example, something like Fra Filippo Lippi’s Annunciation at the Frick Collection. We have the basic knowledge of the story ahead of time, we know what the Annunciation was, but seeing the postures of Gabriel and the Virgin, the tilts of their heads in relation to each other, the ‘hot’ red of Gabriel’s cape and ‘cool’ blue of the Virgin’s, their spatial relationship within the framing of the pillars, their facial expressions and gestures – this all reaches us immediately and cumulatively with a big swoosh and emotional impact beyond any narrative. It is as if all previous knowledge has primed one for this direct experience. Language and knowledge took us only so far and now we can get walloped by color and form. Bray’s work, like all work that can reach beyond interpretation, is like an injection that yields immediate results instead of a slow-working ingested pill. Bray’s work gives us that big swoosh which comes from when an artist incorporates details for an effect on the viewer and not as elements of narrative analysis. 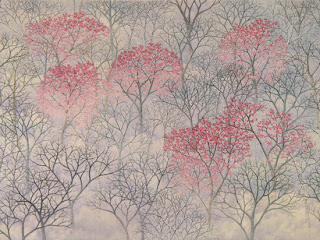 Another influence on Bray was the book by Gaston Bachelard, The Poetics of Space, which encouraged Bray to paint ‘natural phenomena’. Bray often will sit in an area for hours until the visual begins to reveal secrets (about structure?) to him. To me, Bray’s approach asks: What can we get from nature without imputing our knowledge back to nature? What can happen when we are patiently in the presence of and within nature, allowing the mind to become a part of nature and nature to become a part of the mind? What can we glean when we try to experience nature with no scientific preconceptions but trust that nature itself can reveal deep and transformative secrets to us? Bachelard’s book is a contribution to phenomenology, which has been called the ‘science of experience’. I would suggest, however, that phenomenology should be called the experience of experience. A phenomenological approach makes one not only aware of experience but yields insights into our experience of the world. 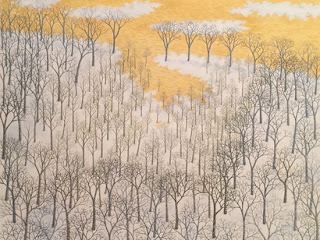 The mysterious contrasts between aspects of nature, familiar structures which now look a little strange and the brilliance of the colors work together in Bray’s work to represent the super-enriched experience of our experience of nature. It is the joy of the perception of perception fueling deeper engagement with the perceived, without knowledge or desire. 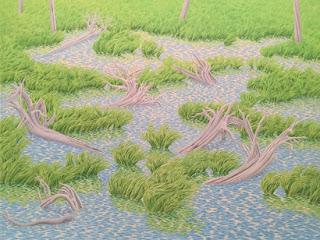 The fact that Bray does not paint people within his landscapes is also significant. Often, by including a person or people, a painting merely becomes a work about transience. Nature and its cycle become the permanent or eternal and the presence of people reveals how brief our hour upon nature’s stage is. Adding people also adds ‘grandeur’ to nature as there will always be a contrast between the fleeting and puny human figure and the seemingly eternal and robust nature.

Interestingly, Bray tries something a bit different as he often, in this series, shows the traces of humans within nature instead of people themselves. The scaring effects of us puny and transient people is evident in many of his works to varying degrees of severity. We see, for instance, traces of a cross-country skier on a thawing lake. In one painting we see a circular pond which was created by a farmer as a source of water for potential fires on his property. As Joseph Gross of the gallery explained to me, by creating this type of pond, the farmer’s property insurance rates dropped. In Bray’s work showing such traces of human action, we see the working of the human mind and desire on the land and the land’s always benevolently regenerative response.