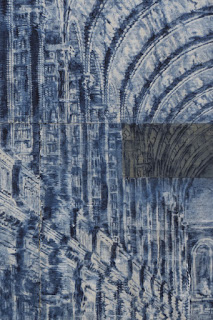 One might be tempted to interpret Jorge Tacla’s latest series of works at Cristin Tierney - Sign of Abandonment - as referencing the decreasing use of the book in favor of a digital world of information. Yet, Tacla’s previous work suggests, to me at least, that he is not predisposed to make such a linear, literal observation. Furthermore, the internet has clearly not decreased, challenged nor changed the cultural hegemony embodied in urban and university libraries; if anything, it has reinforced it and we now have a term like ‘digital colonialism’ describing how the internet is replacing native languages with English and promoting the American values of consumerism and political demagoguery world-wide. Given Tacla’s track record, and the fact that he often uses structures to represent systems of culture and power, I doubt these pieces could be depicting the shift away from one form of hegemony to a more potent one. Indeed, having read numerous reviews of his work, I am convinced that even critics who have tried to tackle Tacla on deeper levels have held on to too much literalism while discussing their themes of history, violence, decay and memory. 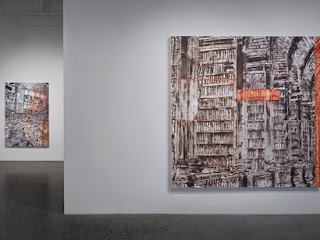 After an earthquake in his native Chile, in 1985, Tacla was able to see the faults underlying the construction of buildings which Chileans heretofore had felt were permanent. Ruins have become a pervading type of image in his work and even when he presents a structure intact, he often presents it from its most assailable position. (These ruins and buildings can also become analogs, I would argue, for aspects of our inner reality.) One should ask, therefore, what it was about Allende’s La Moneda or what it was about the Oklahoma Federal Building or the Pentagon that made it so assailable as a symbol to someone or others? Indeed, are there common denominators to these attacks by Pinochet, Timothy McVey and terrorists guided by an anti-capitalist ideology? 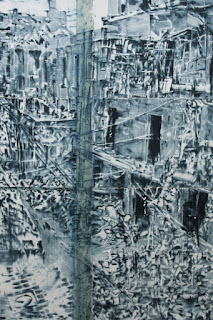 As I mentioned, Tacla looks at his structures and ruins within the context of the creation of culture and power systems and he could be saying that inherent in the creation of any such structures is an antagonism or a deliberate affront almost challenging an attack from someone. Tacla explains that he presents his structures in negative images to differentiate between real and pictorial space, but, to me, these images are in negative form because they are just one half of the total situation - the ultimate reality, the positive, active aspect is in the almost inevitable looming attack or the attack that occurred to create the ruins. The ruins of the World Trade Center represented a collision between ideological matter and ideological anti-matter – the depictions of the buildings and ruins are the anti-matter because they, like negative space, exist in the psyche of those intent on wreaking destruction because they feel a personal or ideological affront from these structures. 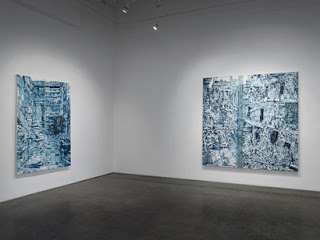 The creation of any state or religious supported structure brings with it its own instability and potential destruction due to the severe ideological divisions in the world and a lack of desire of those with differing viewpoints to coexist. What about the buildings destroyed through natural disaster in Tacla’s previous work? Playing devil’s advocate again, I could argue that the construction of cities is an in-your-face gesture to nature and the way in which humans used to live in greater balance with nature for generations. Why should there not have been a Lisbon earthquake in the 1700s or a horrific tsunami that killed thousands in a highly developed nation just a few years ago? 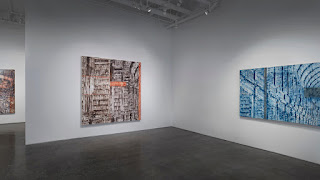 The library would seem to be anti-entropic, anti-decay, and nothing but goodness…but it is also a type of ruin. It seems to have done a better job than the cathedral (another image Tacla has used in the past) of disguising its intentions, but what is the flaw or fault that makes the library vulnerable to abandonment or greater ruin? Well, one of the libraries featured in this series is the Trinity College Library in Dublin. At one point, Ireland was an area of indigenous folks who were conquered and forced ‘within the pale’ by the English. It was a brutal and merciless struggle of conquest which, actually, set the prototype for how the English and Americans would subdue the native population in North America. 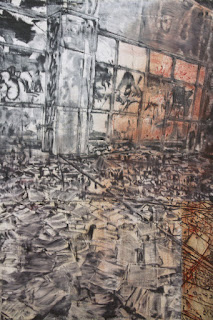 The library, perhaps, represents a form of social memory constructed by an elite, urban class, a form of memory and form of engagement with the world to be contrasted with that of the Irish or any indigenous population which thrived without it, in a different relationship to each other and to the Earth. Much found in libraries has been written with an agenda and various prejudices, and absorbed to predictable results. As Marx pointed out, the ideology of the upper class seems to trickle down to everyone else (Gramsci’s concept of hegemony is based on this). 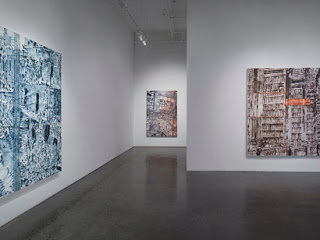 But, you might say, ‘Libraries have not been abandoned – I was at the NY Public Library today and it was pretty packed.’ Sure, but when Tacla depicted the Pentagon, it was in the 1990s – its symbolism to certain folks around the world and a vulnerability created through a lack of precaution and too much self-assurance allowed it to be attacked on 9/11. Tacla presents the library and the museum at its vulnerable point now, so just as buildings can be obliterated, at one time folks lived quite well without libraries, and this remains a possibility underscoring all contemporary and future history. Modern human history is predicated on the obliteration and replacement of non-urban cultures, and this has created a huge vulnerability for urban, developed societies as ideologies conflict and nature rears its head through natural disasters and the effects of forced climate change.

On a more personal and less literal level, the abandonment of libraries might also mean reaching the point where one can strive toward what Paul Tillich seemed to call The Eternal Now. The library can represent a cognitive process of referring to memory and imputing knowledge to the self instead of allowing self-understanding and humane growth to develop in a less coerced, guided or procrustean manner. Instead of the eternal now, memory and knowledge can intrude on our introspection and make unwarranted demands on our inner awareness or maturation.

That being said, I would love to experience more and more of the eternal now, but I am still a huge reader who is concerned about the possible loss of the book in the future. In fact, since not all books are hegemonic, and, indeed, many are quite liberating and enlightening, you may want to stroll over to Cristin Tierney and take a look at this show yourself and see whether my interpretations above hold any water or not.  The show is up until December 16.